Our camp will be a people-powered experiment where we will eat, learn and live together as well as take action against the corporate greed and profiteering of oil and gas that is keeping people in poverty and destroying our planet.

We invite you to join us in Aberdeen to put an end to new fossil fuels and instead crank forward a community-led just transition towards renewable energy democracy.

Interested? Register to take part now by clicking here, it’s free and helps us out a lot!

+ Read the Practical Information briefing for info about mobility, transport, accommodation, language, food and well-being at the camp

As the climate crisis hits home, our governments are pouring fuel on to the fire. Let’s stop them.

After two years of online May Day events we expect to be back on the streets in 2022. Assemble 11.30 on Saturday May 7th for a midday start at the top of Johnston Terrace – we’ll march to the Pleasa nce where there will be stalls, music and a rally. More details fo follow but please put the date in the diary, share the event with your friends and workmates and make sure that your union branch or campaigning groups that you have links to are organising contingents for the march.

Speaker – Yuliya Yurchenko, directly from Ukraine
with back-up by Chris Ford of the Ukraine Solidarity Campaign

RUSSIA GET OUT OF UKRAINE

Sunday 6th March is an International Day of Solidarity with Ukraine – called originally by Code Pink, CND and the Stop the War Coalition.

This event is coordinated by Edinburgh peace and anti-war groups. We plan to form a human chain along both sides of Princes Street.  We will be there in solidarity with the Ukrainian people and with Russian anti-war protestors and we will be calling for a stop to war and for Russian Troops to withdraw.

Lead off Simon Barrow (co-editor with Gerry Hassan of

Scotland after the Virus)

For those who’d like to meet-face-to-face for the first time in ages it will be great to meet up again; and for those who can not make it in to Edinburgh for whatever reason there will be a Zoom link.

COMMUNITY LED ACTION FOR EDINBURGH – WHERE NEXT?

Are you a resident of Edinburgh keen to learn what’s emerging in 2022? Come and hear Who’s doing What & When and how you can get involved!

Networking: How YOU can get involved!

Late in 2021 the City of Edinburgh Council awarded a grant to a partnership of Our Future Edinburgh (OFE)and Edinburgh Voluntary Organisations Council (EVOC) to establish a Community Climate Action Forum under their 2030 Climate Strategy.

We hope that Bridie Ashrowan, EVOC CEO, and Charlie Wright, Forum Coordinator – who engages with citizens and groups enabling all to contribute to climate action in the city will share their initial plans.

In person at Augustine United Church, 41 George IV Bridge, Edinburgh EH1 1EL plus we hope some or all of it blended so those prevented can attend online. Doors open at 6.00pm for refreshments and viewing the stalls.

The networking event will:

Hear about Scottish Government plans for 2022Hear about Edinburgh’s 2030 Climate StrategyExpand ideas from Edinburgh workshops held in October [LINK] Relate citizen’s initiatives to Edinburgh’s 2030 Net Zero StrategyExplore how SCCAN’s regional networking fits with planned Forum Work out how everyone can contribute in our different ways.

A collaborative event hosted by SCCAN – Scottish Communities Climate Action Network with input from EVOC, Our Future Edinburgh, Edinburgh Climate Coalition and Edinburgh Climate Festival. To be held in person at Augustine United Church with online access via Zoom – link sent to you 2 days + 1 hour before. Key contributions will be recorded.

NO WAR – HANDS OFF UKRAINE

Demonstrate for the right of people in the Ukraine to build their own future without threats of war. Demonstrate in solidarity with anti-war activists in Russia. Demonstrate in opposition to the UK’s role in the NATO military alliance. The protest will be at the Russian consulate 58 Melville St, Edinburgh EH3 7HF from 5pm until 5.30pm and then move to the UK government offices at 1 Sibbald Walk, Edinburgh EH8 (just off New Street at the back of Waverley Station) from 6pm until 6.30m. Bring placards. Wear a mask.

Edinburgh COP26 Coalition is protesting at Holyrood on Wednesday, 5pm – 6.15pm because BP is inside spreading greenwash to MSPs, by promoting themselves as the solution to the climate crisis they continue to create.

BP promises net zero by 2050, that is 20 years too late. The United Nations have stated 2030 is the last chance for net zero, after which fossil fuels will have pushed the world well beyond the critical 1.5 degrees centigrade limit.

Bernie Looney, BP’s CEO celebrated ‘higher throughput’ generating £3,3 billion profit in the last quarter of 2021 compared to £86m the year before. Combined with Shell they produce 1.7bn tonnes of greenhouse gases per year. Yet BP paid no corporation tax on North Sea oil 2018-20.

The corporations driving ecocide should not be welcomed but shown the door. They are knowingly endangering humanity’s future. If BP is sincere about net zero, it will immediately announce that its new Vorlich oilfield in the North Sea will not be further developed.

The public is invited to join our peaceful protest. As Greta Thunberg put it, we had enough ‘blah, blah, blah’ in Glasgow: Keep Edinburgh out of it.

JOIN THE RIC CONTINGENT ON
THE COP26 INDEPENDENCE BLOC

Coach Travel to Mass Mobilisation in Glasgow on Saturday 6 November

Or cut and paste this link:

Here is a report from one of the Coalition activists: “I looked this up and eventually managed to fill in their form. Almost immediately I had a request from a young German woman who wants a bed for 3 nights, 4th – 7th November. There is a waiting list of 3,000 people from around the world desperate for accommodation. SO, if you have any space at all, do please consider putting someone up and contacting this network. For most of the time, they will just need a bed and an early breakfast, and maybe some help on the first day to get to the bus station. They will be given other meals in Glasgow.

Fridays for Future Edinburgh school strike for climate justice, 2 days before COP so anyone who can’t make it to Glasgow can protest.

Assemble 10.30, The Meadows. The march will leave around 11am and be heading along the bridges and down the Royal Mile before ending at the Parliament by around 1pm.

DEMONSTRATIONS AGAINST THE HOLYROOD PROTEST BAN

The Scottish Parliament belongs to us, the Scottish people, not to the politicians. We should have the right to protest there without fearing criminal prosecution. Sadly, the democratic right to peaceful protest is under threat across the UK and Scotland is no exception.

From October 1st, the buildings and grounds of the Scottish Parliament will be designated as a “Protected Site” under the Serious Organised Crime and Police Act 2005, meaning it will be a criminal offence, punishable with up to a £5,000 fine or 1 year in prison, to be present “without lawful authority”. The only other site in Scotland with the same protected status under SOCPA is that other noted tourist attraction, Faslane nuclear base!

This law has been made by the UK Home Office at the request of the SPCB, the committee of 5 MSPs which runs the Parliamentary estate. It’s a law made in Westminster, not Holyrood, though the Scottish Parliament has the power to reverse it. Legal experts have given their opinion that the law violates the European Convention of Human Rights (EHCR) and that protestors would have a good chance of defeating any conviction in court. But how many people will be in a position to assume the cost and risk of such a legal action?

The effect of this law is to give police a big stick with which to threaten protestors. It won’t be a question of mass arrests, but of “managed protest” where protestors are told what they can do, where they can stand, what messaging is allowed, etc., under threat of arrest.

In the run-up to COP26, what politicians fear most is protestors holding them to account for their failure to tackle the climate crisis. When politicians seek to ban protest, it’s because protest works — not because it disrupts the democratic process, but as a fundamental democratic right and a vital part of that process.

Demonstrations against the Ban

Thursday 30th September, 11am
(the day before the ban comes into effect)
No Protest Ban at Holyrood – rally at Parliament
Facebook Event

Saturday 2nd October, 11am
Embrace our Parliament!
To surround Parliament with a ring of people holding hands, to exercise our democratic right to protest and to stop the Holyrood protest ban. 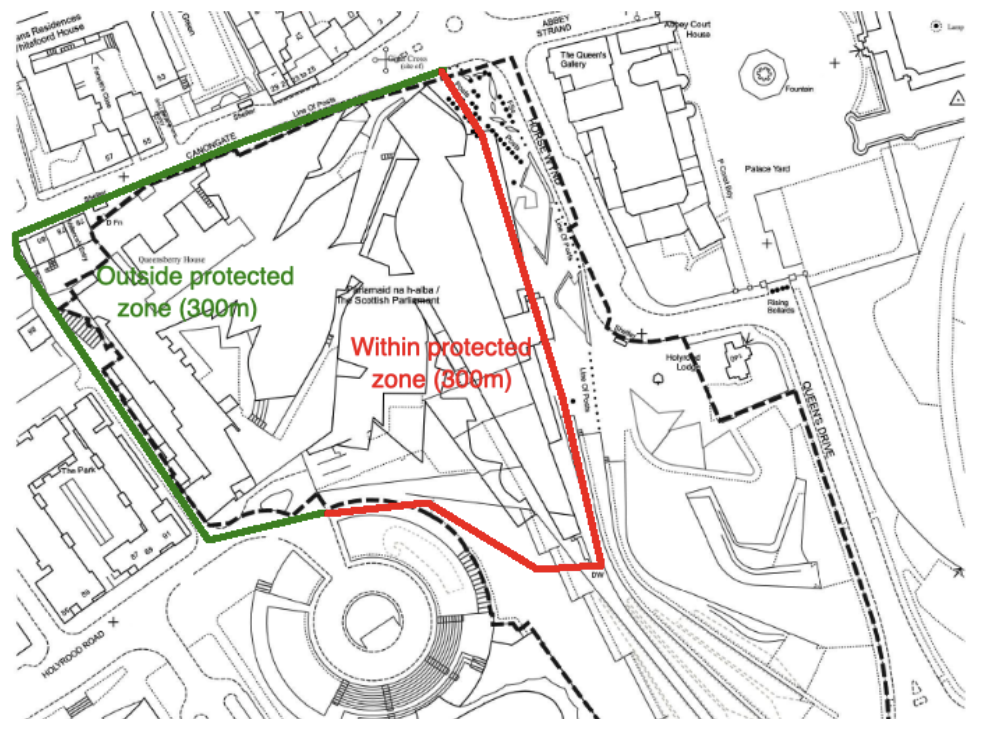 Surround the Scottish Parliament with a ring of people holding hands, to protest against the designation of Holyrood as a “Protected Site” under SOCPA, making protest a criminal offence.

The messaging for this action is simple: The Scottish Parliament belongs to us, the Scottish people, not to the politicians. We should have the right to protest there without fearing criminal prosecution.

If you feel strongly about this, get along to our Parliament on Saturday 2nd October at 11 am and show your dissent. Meet up at at the grassy amphitheatre in front of parliament (see map link).

THE SNP-GREEN ALLIANCE –
IS IT A WAY FORWARD?

SAVE OUR CARE HOMES